If you’ve been growing seriously for any amount of time, cross-pollination has very likely been a concern, or an interest of yours.

Cross-Pollination : The Good, The Bad & The Ugly….Literally!

I have attempted a few cross-pollination experiments on my own over the last few years with little success. However, in 2016, I had great success! I successfully created a very UGLY and a very HOT pepper. I named this pepper, The Logan. You can find more information about The Logan here.

While peppers and tomatoes are self-fertile, tomatoes require the help of bees and other insects to transfer the pollen from flower to flower because are androgynous, having both male and female parts in each flower. However, bees, other insects, and even the wind can cause an unintentional cross-pollination. This is why it is recommended to plant your similar type of plants together, and to keep them further away from others. For example, lets just say you only plant tomatoes and peppers in your garden, and for this example, lets use two types of each. Green Bell Peppers, Habanero Peppers, Cherry Tomatoes, and Beefsteak Tomatoes. Refer to the graphic guide below. The Green Bells are planted in a cluster, then next to them, the Cherry Tomatoes, then the Habanero Peppers, and finally the Beefsteak Tomatoes. 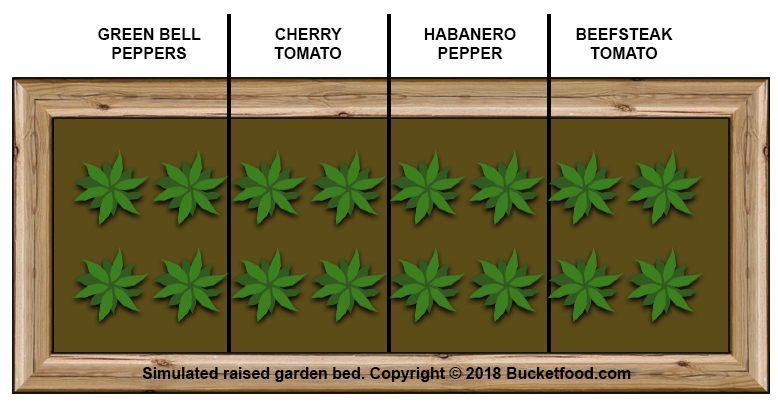 This will reduce the possibility of cross-pollination from bees, insects, and the wind. Because bees and insects tend to follow a path, going from one plant to the next to the next, etc…..chances of pollen from the Habanero Peppers getting transferred to the Green Bell Peppers are very low. You don’t have to worry about pepper pollen mixing with tomato pollen, these two types of plants are not “sexually” compatible. Please keep in mind, this is not a 100% guarantee that cross-pollination will not occur, but aside from planting your different types of plants in completely different parts of your yard/farm, this is the next best thing you can do.

But what if you want to cross-pollinate? How hard is it? Well, it can be extremely hard to let mother-nature take care of it, if you have a goal. We set out to make a cross between the Carolina Reaper and the Moruga Scorpion super hot peppers by taking the pollen from the flowers of the Moruga Scorpion and transferring it to the flowers of the Carolina Reaper. It was tedious work, but the result was very satisfying.

How do you do it? If you are aiming for a 100% guarantee that your cross-pollination, and think that hand pollination will give you that guarantee, perhaps creating a new version of a pepper or tomato isn’t in the cards for you. Here’s the thing, even if you are successful, you won’t know until you harvest the seeds from the hand pollinated plant, and plant them the following growing season. That’s right, it’s a long time to wait to see if you nailed it. In our experiment, we took pollen from a Yellow Moruga Scorpion hot pepper plant, and moved it to the Red Carolina Reaper hot pepper plant. This has to be done every day, before peppers start to produce, and also during the peak of pollen, which is usually in the afternoon. The Red Carolina Reaper will grow normal because the seed that produced the plant was not affected. So if you keep that Red Carolina Reaper plant alive for a few years, it will always give you red Carolina Reapers. However, the seeds of the affected flowers that will eventually start to produce peppers will be changed.  Check out the pepper creation from our little experiment.

Looks pretty mean huh? It is! We have yet to have this pepper officially measured to find out where it falls on the Scoville scale, but hopefully that will change soon. We tested it with a few friends, and it seemed to hold it’s weight with the Reaper and Scorpion! There are a few videos on the Logan Pepper page of people trying the pepper, some are quite funny 😉